Record-Breaking Early Voting in Georgia but Still No Apology for ‘Jim Crow 2.0’ Allegations 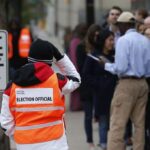 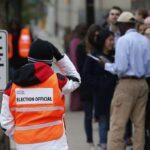 After the May 24 primary in Georgia, in which a record number of black voters turned out, the proponents of “The Big Lie” — “one of the most hysterical, delusional, and cynically dishonest narratives in recent American political history,” as NRO’s Nate Hochman observes — claimed that their overwrought charges of “voter suppression” would be realized in the November election.

“Great efforts have been made by the faith community to organize, educate and prepare voters for S.B. 202. But comparing a primary to the general is like comparing apples to oranges,” said Bishop Reginald Jackson.

Well, Bishop, here we are in the lead-up to the November election and we’re still waiting for all that voter suppression to happen.

Some 729,029 people cast ballots Monday through Friday, far surpassing the 488,177 people voted during the same period in the 2018 midterm election.

Voter turnout typically peaks in presidential election years. In 2020, about 68% of Georgia’s voting-eligible population participated, according to the United States Elections Project at the University of Florida. Turnout was 54% of the eligible population in 2018.

But with the governor’s race and control of the U.S. Senate and House of Representatives on the line, voter interest remains high this year.

This was the kind of smear that took on a life of its own. In effect, the left talked itself into a hysterical reaction. Commentators, pundits, and politicians tried to outdo one another in saying how dire, how evil, and how world-ending this law would be. They were bound to be wrong. But they couldn’t very well walk back any of their rhetoric. So they doubled down and became even more morbidly exaggerated in their charges.

Related: Looks Like Stacey Abrams Is Going to Need a New Excuse When She Loses on November 8

Much of the worst rhetoric came from Georgia’s black activists. They’re used to using apocalyptic rhetoric to express their political opposition to a law or a candidate. And they also know that no one except a few fuddy-duddy conservatives will make a stink about it. They can dismiss that pushback as raaaaaacism, of course.

There is simply no argument that the backers of the “Jim Crow” smear can make to counter this raw, empirical evidence of their dishonesty. Conservatives have been pointing this out for months, but it bears repeating, given the unlikelihood that any of the powerful voices who bolstered the myth will admit their error — or be held accountable for it by their like-minded counterparts in the media. In our moment of extreme partisan division and increasingly heated rhetoric, it can be easy to be desensitized to the ludicrous nature of the things that partisans like Joe Biden say on a routine basis. But we should recognize the magnitude of what happened: The sitting president of the United States alleged that his political opponents were worse than segregationists based on a verifiable falsehood, and many of the very same self-styled voices of reason and decency that had spent the Trump years waxing poetic about the dangers of incendiary political rhetoric just . . . shrugged.

The Georgia voter integrity law did not target blacks for voter suppression. That was a calumnious lie that every single commentator, business executive, sports star, and writer knew was a lie. What makes it worse is that the lie cost the citizens of Georgia hundreds of millions of dollars in business income and several thousand jobs — jobs that the “suppressed” voters in Georgia desperately needed.