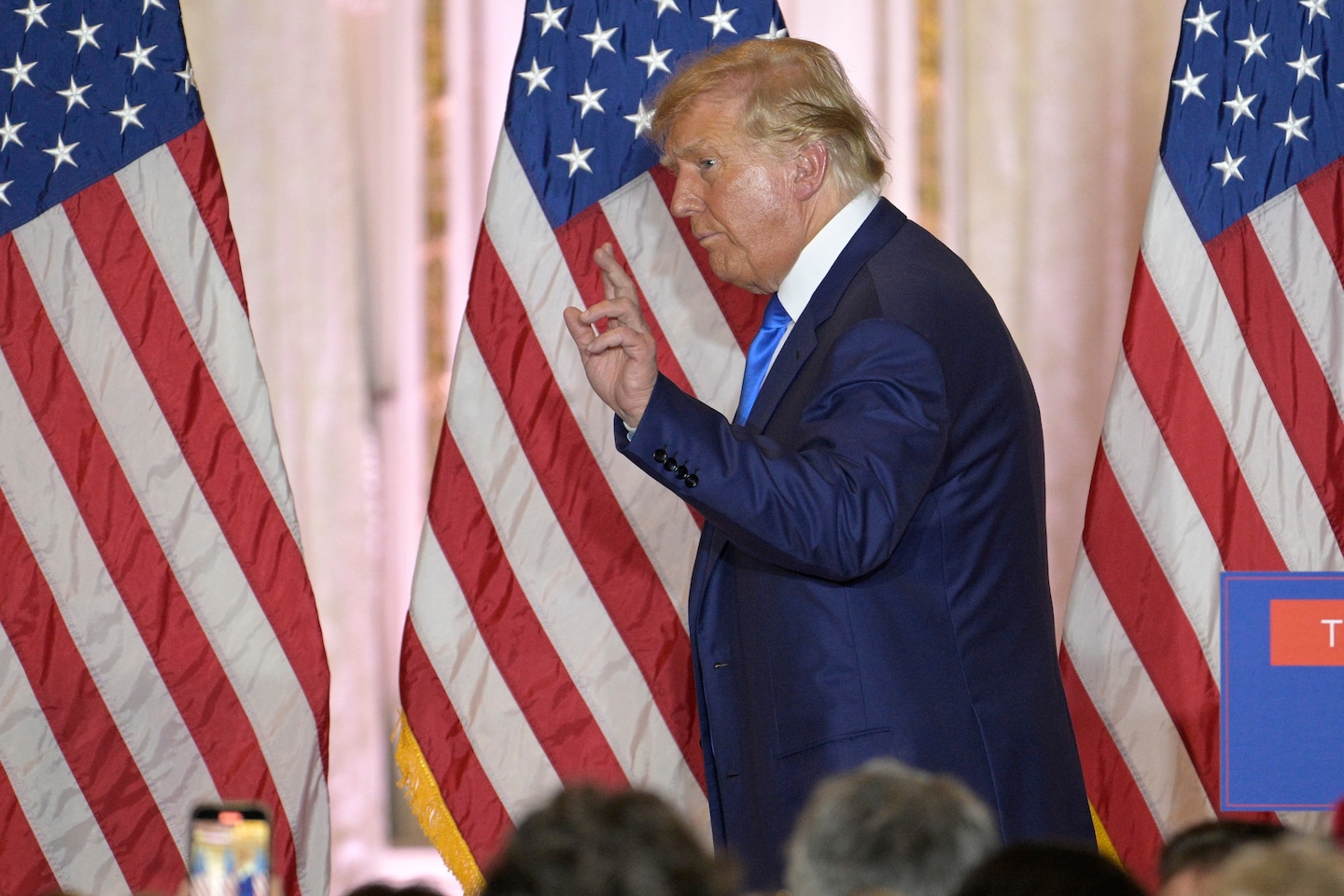 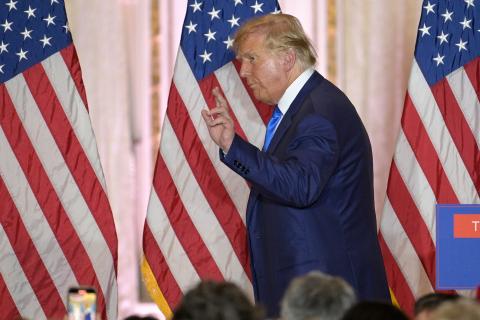 Former president Donald Trump’s standing as the dominant figure in the Republican Party was challenged Tuesday night by a string of election results that even some of his advisers viewed as wounding to his political future.

Trump is taking blame from Republicans for disappointing performances by many of the candidates he backed, at the same time that Florida Gov. Ron DeSantis won a landslide reelection, instantly elevating his profile as a serious 2024 presidential contender.

In a sign of Trump’s diminished and newly uncertain footing, some longtime allies are now encouraging Trump to delay a presidential announcement he had planned for next week as a victory lap for a red wave that didn’t materialize.

One person familiar with the discussions, who like others spoke on the condition of anonymity to reflect private conversations, said Trump was polling advisers for their opinions but had not made up his mind. But in a Fox News interview Wednesday evening, he cast doubt on a delay, saying, “We had tremendous success. Why would anything change?”

“Republican chairmen across a wide spectrum of states were counting on Donald Trump to deliver victory for them last night and he didn’t, they are let down,” David Urban, a top adviser to Trump’s winning 2016 campaign in Pennsylvania and a longtime ally, said Wednesday. “It is clear the center of gravity of the Republican Party is in the state of Florida, and I don’t mean Mar-a-Lago.”

The immediate cause for Trump advisers to discuss delaying his promised “very big announcement” scheduled for Tuesday at Mar-a-Lago, his Palm Beach, Fla., resort, was a Senate runoff in Georgia. Trump’s handpicked Senate candidate, football legend Herschel Walker, trailed incumbent Democrat Raphael G. Warnock by about 1 point as of Wednesday afternoon, with neither candidate clearing 50%, leading to a runoff on Dec. 6.

“Everything is about Herschel. I’ll be advising him to put it off until after the runoff,” said Jason Miller, a longtime adviser and sometime spokesman for Trump. “I’m not alone when I say President Trump’s best moves are to put all his efforts to get Herschel Walker elected.”

Miller said Trump would decide soon, and that he was not aware of anyone in his orbit who wanted him to stick with the original plan. Five advisers in regular touch with Trump said they hoped he would wait until after the runoff.

A Trump spokesman did not respond to requests for comment.

For Republicans, the upcoming Georgia Senate runoff posed an uncomfortable replay of twin Senate races in January of 2021, when Trump largely focused on his own grievances about the 2020 election rather than pulling the Republican candidates over the finish line. They ultimately lost, one of them to Warnock.

Trump has been eager to jump into the 2024 race, to the point that he kicked off a last-ditch scramble by aides and Republican leaders to stop him from announcing his candidacy on Monday night, on the eve of the election. Instead, Trump said he would make an announcement next Tuesday.

But the election returns so far have failed to add up to the blowout Trump was hoping to capitalize on, and he gave only brief, subdued remarks Tuesday night from a watch party at Mar-a-Lago, in the path of a hurricane and subject to an evacuation order.

Two people present with Trump at Mar-a-Lago on Tuesday night said he was in good spirits, but one of these people said he spent time on Wednesday fuming about the loss by his endorsed candidate, Mehmet Oz, in the Pennsylvania Senate race and the Republican adulation of DeSantis.

By contrast, DeSantis spent election night celebrating a whopping, nearly 20-point victory with supporters chanting for him to run for president. A person close to the governor described his team as “euphoric” and called Tuesday’s results “disastrous” for Trump.

“I have never seen anything like it, and I don’t think any Republican has in Florida,” said Brian Ballard, a longtime powerful lobbyist in Florida. “He has realigned voting coalitions in Florida that I think will benefit the party for generations. After the election yesterday, he is even more so a leader in the Republican Party.”

Two DeSantis allies predicted the governor would wait until Florida’s legislative session ends in May to announce a White House bid, and in the meantime would campaign for Walker in the Georgia Senate runoff. A spokesman did not immediately respond to questions about DeSantis’ plans for the Georgia runoff or the 2024 race.

People who’ve worked with DeSantis say gaming out his moves is difficult because he keeps decision-making to himself, his wife and his chief of staff. A longtime legislative aide in Tallahassee said Tuesday’s results showed that DeSantis is a viable alternative to Trump, but that may not matter if Trump barrels ahead anyway.

“Nobody thinks the path for DeSantis is taking Trump head-on at this point,” the aide said, expecting Trump would “run the party to the ground.”

Even before Tuesday’s election results, Trump viewed DeSantis as a threat, according to the former president’s advisers, and Trump did not wait for polls to close to start attacking him. He mocked him last week as “Ron DeSanctimonious.” On Monday, he threatened to release damaging information about DeSantis should he run, according to the Wall Street Journal.

DeSantis did not return fire, other than holding his own campaign event on Saturday, competing with a Trump rally in Miami. DeSantis’s crowds and positive news coverage further irked Trump, who called him ungrateful for his support in 2018, according to people close to him.

On Wednesday Trump, marooned at his closed oceanfront club as the hurricane was expected to come ashore in Palm Beach and his advisers scrambled to go home, resumed the swipes, posting to his Truth Social website that he won more votes in Florida in 2020 than DeSantis did on Tuesday. In percentage terms, DeSantis won by about 20 points, whereas Trump carried the state by less than four points, and ran in a presidential year with higher turnout.

DeSantis was not the only Republican who appeared unintimidated to challenge Trump for the 2024 nomination. Sen. Tim Scott (R-S.C.) in his victory speech said he wished his grandfather had “lived long enough to see perhaps another man of color elected president of the United States.” Virginia Gov. Glenn Youngkin appeared on Fox News discussing his own White House aspirations, saying, “I appreciate it. I am always humbled on this discussion.”

Trump’s estranged vice president, Mike Pence, is also planning a 2024 run, with a book launch next week. “It was a year when we had all the wind behind our backs, and it should have been a better night,” Marc Short, a top adviser to Pence, said of Tuesday’s results. “But at the end of the day, we’re going to win the House and quite possibly the Senate. Elections are about the future, and a lot of Republicans are talking about the past. I think we can win on the issues. We have to just get better candidates.”

New Hampshire Gov. Chris Sununu (R), who won reelection by 15 points while the Trump-endorsed Senate candidate Don Bolduc lost, urged Trump not to declare his candidacy before the Georgia runoff. “It’s a terrible idea,” he said in a Fox News interview on Wednesday. “I don’t know who is advising the former president to make an announcement next week. They should be fired.”

The close adviser said Trump thinks he’s getting blamed for Republicans’ underperformance without ever get any credit for boosting candidates. In an interview posted ahead of the results on Tuesday with the network NewsNation, Trump said, “Well, I think if they win, I should get all the credit. If they lose, I should not be blamed at all.”

Many Republicans are especially sensitive about Trump in Georgia because they blame his fraud claims for suppressing turnout in the 2021 Senate runoffs. Then Trump put up unsuccessful primary challenges against incumbent Gov. Brian Kemp and Secretary of State Brad Raffensperger, who refused to cooperate with his efforts to overturn the election results. Both were reelected Tuesday, and Trump-endorsed Walker ran about 5 points behind Kemp.

“Past evidence is we lose elections recently where Trump gets involved in our state,” said a Georgia Republican strategist who spoke on the condition of anonymity to speak frankly about the runoff. In four elections in the state since November of 2020 — the presidential race, 2021 Senate runoffs, the 2022 Republican primary, and Tuesday’s election — the candidates Trump supported failed.

“We have had answers,” the strategist said of the impact Trump could have in the state, if he campaigns heavily for Walker in the runoff. “It would be a disaster.”

Republican Party officials were preparing to marshal a huge operation in Georgia and were talking to top donors on Wednesday about helping fund the effort, according to people familiar with the matter.

Races that have yet to be called in Arizona and Nevada will determine whether the Georgia runoff decides control of the Senate or pads either party’s majority. Even if Republicans eke out victories in those races, Tuesday’s split-screen between Trump and DeSantis is leading many Republicans to blame Trump and his endorsed candidates, with their allegiance to his election denial, for dragging down Republican prospects.

Even where Trump’s picks won, they often trailed other Republicans. In Ohio, for instance, Trump-endorsed J.D. Vance beat Democrat Tim Ryan for a Senate seat but underperformed Gov. Mike DeWine by 9.5 points and relied on about $40 million of help from outside groups — money that then wasn’t available to help Republicans in other close Senate races. Vance did not thank Trump in remarks Tuesday.

“In Pennsylvania, as in places around the country, the biggest takeaway has to be the toxic effect that Donald Trump had on completely winnable races,” said Sen. Patrick J. Toomey, who is retiring and whose seat Oz lost to Democrat John Fetterman on Tuesday. “His support for candidates whose primary attribute apparently was their loyalty to Donald Trump became a huge problem. And it seems that the more ultra MAGA a candidate was the more that candidate underperformed.”

Toomey, who voted to convict Trump at his impeachment trial after the Jan. 6 insurrection, said he did not classify Oz as “ultra MAGA,” but that his chances were dragged down by gubernatorial nominee Doug Mastriano and other extreme candidates also backed by Trump.

“I’m increasingly of the view that his influence is going to wane,” he said. “I suspect last night’s elections are going to accelerate that process because it’s unavoidable that his influence is so unhelpful to the party and to the prospects and that certainly should weigh on people’s considerations for 2024.”

Gilbert Hartmann LaPiere- Bio, Family, Education, and Other Interests.
Jefferson City Schools will be the first in Georgia to reopen Friday. These parents won’t be sending their children
When Do You Need a Georgia Eminent Domain Attorney?
Republicans in Georgia House pass new restrictions in backward step for voting rights
Obama, campaigning in Georgia, warns of threats to democracy