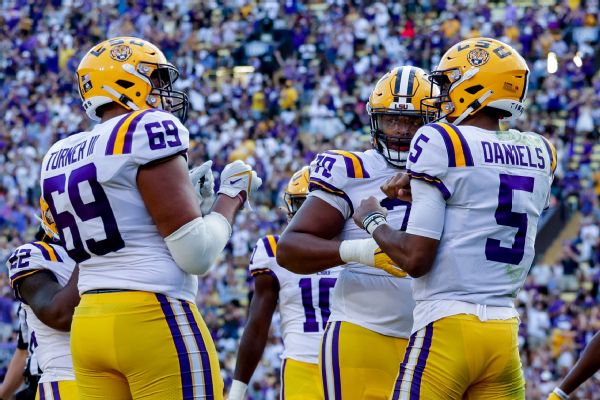 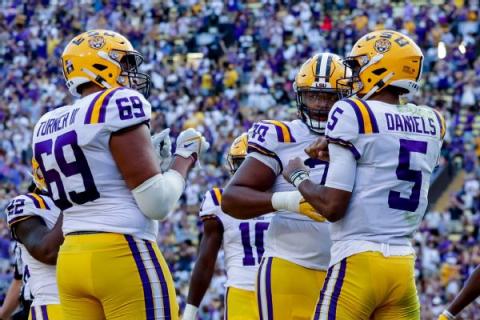 No. 7 TCU moved up a spot after remaining unbeaten with a second-half comeback against Kansas State. Oregon jumped two spots to a season-high No. 8 after routing UCLA.

Oklahoma State was ranked No. 9, and USC and Wake Forest tied for No. 10.

LSU, in its first season under coach Brian Kelly, handed Ole Miss its first loss of the season in emphatic fashion and moved back into the rankings ahead of its game against Alabama on Nov. 5 in Baton Rouge.

The Tigers were ranked for a week earlier this month before losing to Tennessee. They improved to 6-2 by outscoring Ole Miss 42-3 after falling behind by 14 in the first half.

South Carolina, under second-year coach Shane Beamer, is ranked for the first time since a one-week stint after the opening weekend of the 2018 season. The Gamecocks beat Texas A&M to improve to 5-2. They have not been ranked this late in a season since 2013.

LSU moving into the rankings before its off week ensures that Tigers-Crimson Tide will be a matchup of ranked teams for the first time since the SEC West rivals played a 1 vs. 2 game in 2019.

Alabama is off next week too.

• LSU and Tulane are both ranked for the first time since 1998, though the Louisiana schools were heading in different directions when they overlapped that season.

• Texas is unranked again after blowing a second-half lead at Oklahoma State. The Longhorns fell to 5-3.

• Mississippi State once again had the misfortune of catching Alabama immediately after a Crimson Tide loss and was knocked out of the rankings. The Bulldogs did score a touchdown in Tuscaloosa for the first time since 2014. It came on the final play of the game.

After having a total of 11 games matching ranked teams the past two weeks, the next slate is not quite as juicy.

• No. 2 Ohio State at No. 13 Penn State. Sixth straight meeting with both ranked. The Buckeyes have won the previous five.

• No. 19 Kentucky at No. 3 Tennessee. Last time the Wildcats and Volunteers were both ranked when they played was 1951.

Breakdown of Sidney Powell’s Lawsuits in Georgia and Michigan
Senator Ted Cruz Explains Why the Georgia Runoff Election Matters a Lot
FACT SHEET: How the Inflation Reduction Act Will Cut Energy Costs, Bring Jobs to Georgia
Divorce Financing in Georgia
Types of Wildlife That Can Get in Your Georgia Home