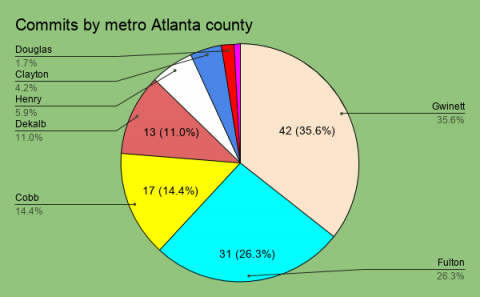 In this cycle, the metro Atlanta recruits have also made commitments sooner than some of their counterparts. For this cycle, there are 28 total blue-chip prospects in the state. Of the 15 blue-chip prospects from the metro Atlanta area, 12 have already committed. For the rest of the state, only six of those prospects have committed.
The 2021 class perhaps best illustrates how Georgia has gone about recruiting the state of Georgia in recent seasons. The Bulldogs have only one commitment from a metro Atlanta prospect, 4-star defensive lineman Jonathan Jefferson. But Georgia has commitments from three blue-chip prospects who all come from outside the metro Atlanta area, including 5-star quarterback Brock Vandagriff.
That means that while Georgia has missed out on some of those elite Atlanta prospects, such as linebacker Barrett Carter and cornerback Jordan Hancock, a number of the best players in the state, such as 5-star offensive tackle Amarius Mims and 4-star wide receiver Deion Colzie, are still available for the Bulldogs to land.
A closer look at Gwinett County
Of the 202 blue-chip prospects Georgia has produced over the past five years, 42 have come from Gwinett County. The county produces the most blue-chips in the entire state and is one of the top talent producers in the entire country.
And in Smart’s time as the head coach at Georgia, he’s landed just three blue-chip recruits from the area, with the last being Warren Ericson in the 2018 signing class. So when people complain about Georgia’s recruiting efforts in the Atlanta area, they’re most likely wondering why the Bulldogs haven’t done a better job recruiting Georgia’s top county.
The 2021 class once again illustrates Georgia’s struggles in this part of the state. The top three players in Gwinett County also double as the top three players in the metro Atlanta area. And all of them have already committed to playing outside of the state. Carter and Hancock, teammates at Suwanee, Ga.’s North Gwinnett High School committed to Clemson. Those two both play at positions of need for Georgia in this cycle.
Speaking before his decision, Carter said that Georgia was a finalist in part because it was the hometown team. But Carter still ended up picking the Tigers, who are only about 30 minutes farther away. While being the local team does often gives Georgia a foot in the door, it’s usually not enough on its own to convince one of the country’s best prospects that it is the best place for his future.
Related: What Barrett Carter’s decision means for Georgia and where the Bulldogs go next in 2021 recruiting
Then there’s running back Cody Brown. He stars for Parkview High School in Lilburn, Ga as he rushed for 1,676 yards in his junior season. While Georgia wants to take two running backs in this class, Brown committed to Tennessee earlier in May. Georgia already has one commitment in the cycle from running back Lovasea Carroll, originally from Warrenton, Ga., before transferring to IMG Academy in Florida. The Bulldogs are also well-positioned with Donovan Edwards, a running back from West Bloomfield, Mich., who is a higher rated prospect than Brown.
In recent cycles Georgia has shown it has no problem looking outside of the Peach State to land top talent. The last cycle saw Georgia bring in Kendall Milton from Clovis, Calif. In the 2018 cycle, Georgia went to North Carolina for Zamir White and Miami for James Cook. The 2017 cycle saw them land D’Andre Swift from Philadelphia.
Given that Georgia is ‘RBU’ and can use that brand nationally, it’s probably not a coincidence that Elijah Holyfield is the only metro Atlanta running back Georgia has signed since Smart has taken over.
Of the six blue-chip prospects from Gwinett in the 2021 cycle, all of them are already committed to schools other than Georgia. And each of them will play for team’s Georgia will see on its 2021 schedule in Clemson, Tennessee and Florida.
The 5-star level
Gwinett currently doesn’t have any 5-star prospects for this recruiting class, but the 2019 class saw the country produce five 5-star prospects. And all five of them elected to play their college football outside of the state.
Across the rest of the metro Atlanta area though, the Bulldogs have done much better at attracting the 5-star prospects. The Bulldogs have gone into Fulton, Cobb, Dekalb and Henry counties to land a 5-star prospect. Gwinett is the only county that has produced a 5-star prospect that Smart hasn’t landed at least one from dating back to the 2016 cycle.
But while the Bulldogs may not have landed the likes of an Arik Gilbert or an Owen Pappoe, they’ve more often than not shown they can recover and land an elite prospect from outside this footprint.
Pappoe, who played for Grayson High School in Gwinett County and ultimately signed with Auburn, was a key linebacker target in the 2019 cycle. After Georgia missed out on him, it pivoted and landed Nakobe Dean out of Lake Horn, Miss. Dean was actually a higher-rated prospect in the cycle and had a promising freshman season for the Bulldogs.
Related: Georgia LB Nakobe Dean on path to greatness by all measures
Georgia did something similar at the wide receiver spot in 2019. After seeing Jadon Haselwood de-commit and sign with Oklahoma, the Bulldogs flipped George Pickens, who went on to have a better freshman season than Haselwood.

This is where Georgia’s national recruiting success, especially in the past two seasons, has really helped make up for some of those misses in the metro Atlanta area.
“We might have been second or third on a national kid that was a really good player. Say a Kendall (Milton), Say a Kelee (Ringo), but we won a lot of those,” Smart said while discussing Georgia’s 2020 signing class in February. “The other part is we lost some instate battles that were really, really good players.”
“So I think the two of those merged just sort of happened at unique positions where we would’ve taken the in-state guy or the out of state guy. It just so happened we got the out of state guy.”
The growing orange concern
As Smart mentioned, Georgia has been missing out more on in-state players. So with Georgia getting more and more of its elite players from outside the Peach State, which schools are hurting the Bulldogs the most, especially inside the metro Atlanta area?
The biggest one to know is the Clemson Tigers. Under Dabo Swinney the Tigers have always done well in the state, while landing the likes of Deshaun Watson and Trevor Lawrence. But in recent cycles, they’ve put in even more focus on the Atlanta area and it has paid off.
The Tigers signed multiple Atlanta area prospects in each of the last five signing classes, including 5-star defensive end Myles Murphy and 5-star cornerback Andrew Booth in the last two cycles. And they’ve gotten off to a strong start in the 2021 cycle, as Clemson already has commitments from four Atlanta-area blue-chippers, including the top two overall talents in Hancock and Carter.
The other team that has most recently made significant progress in Atlanta is Tennessee. The Volunteers have also landed multiple signees in each of the past two recruiting cycles, and have two commitments in the 2021 class in Brown and 4-star wide receiver Julian Nixon.
As Jeremy Pruitt continues to become more established at Tennessee, it’s clear it Atlanta is going to become an even bigger and more crucial part of his program. And that likely will come at the expense of Georgia, even though the Bulldogs continue to do a better job of recruiting the area than any other program.
And after Alabama got shut out in the 2018 cycle, it signed six blue-chip prospects over the past two cycles. Unlike Tennessee and Clemson though it holds no 2021 commitments from one of the prospects in the area. 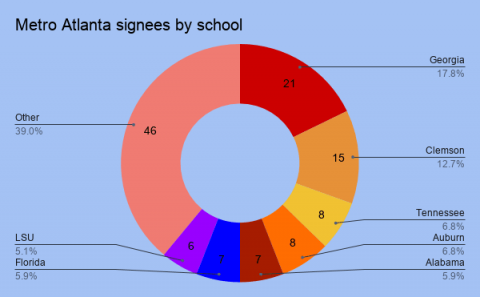 The fact that just about every major SEC power is or needs to recruit Atlanta at a high level only makes things more difficult for Georgia. It won’t be like it was for USC with the Los Angeles or Miami recruiting south Florida for those super teams of the late 1980’s and early 90’s. There’s simply too much regional competition in metro Atlanta for Georgia to dominate it, as opposed to how LSU handles New Orleans.
What you’ll notice about the list above is that all but one of these teams is an SEC program, and Clemson essentially operates as one from the comfort of the ACC. Atlanta isn’t just responsible for supplying the home-state Bulldogs with top recruits, it’s a key part of several of the best programs in the nation’s top conference.
From a pure numbers standpoint, sure Georgia could do a better job of recruiting the metro Atlanta. If Smart and his staff had ignored positional need and signed just the 22 blue-chip recruits from the metro Atlanta area in the 2020 class, Georgia would’ve finished with the No. 4 overall recruiting class.
But in doing so, the Bulldogs then probably don’t get a Milton, a Ringo, a Mekhail Sherman or a Marcus Rosemy. All players who figure to be huge pieces of what Georgia continues to build in the coming seasons.
Missing out on a Carter or a Gilbert at the moment should be seen a miss, given in the last two cycles those two players have played at a position of need for the Georgia program. But when the Bulldogs are able to go out land a Darnell Washington and a possibly a Smael Mondon instead, the misses in the metro Atlanta aren’t a reason to question Smart’s recruiting results.
Georgia is still the only program in the country to sign a top-three recruiting class in each of the previous four recruiting cycles. Those first two cycles saw Georgia lean heavily on the metro Atlanta area. These last two have seen Georgia skew more nationally for those elite recruits.
And while Clemson and Tennessee have picked up a few more wins in the area, they’re not exactly storming the gates and raiding the area for all of the top recruits. The Bulldogs are still getting their fair share and more so than any other program.
It’s just that no program, not even a Georgia program that is among the national elite in the country, can be expected to dominate the metro Atlanta area from a recruiting standpoint. The area is just too deep and too vital to so many other programs for that to happen.
Full list of all metro Atlanta recruits since 2016 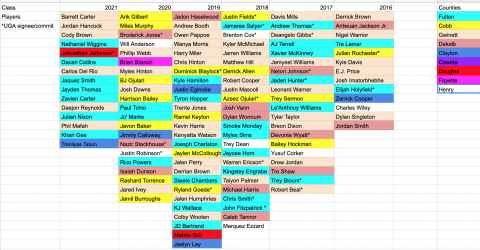 Good Dawg of the Day