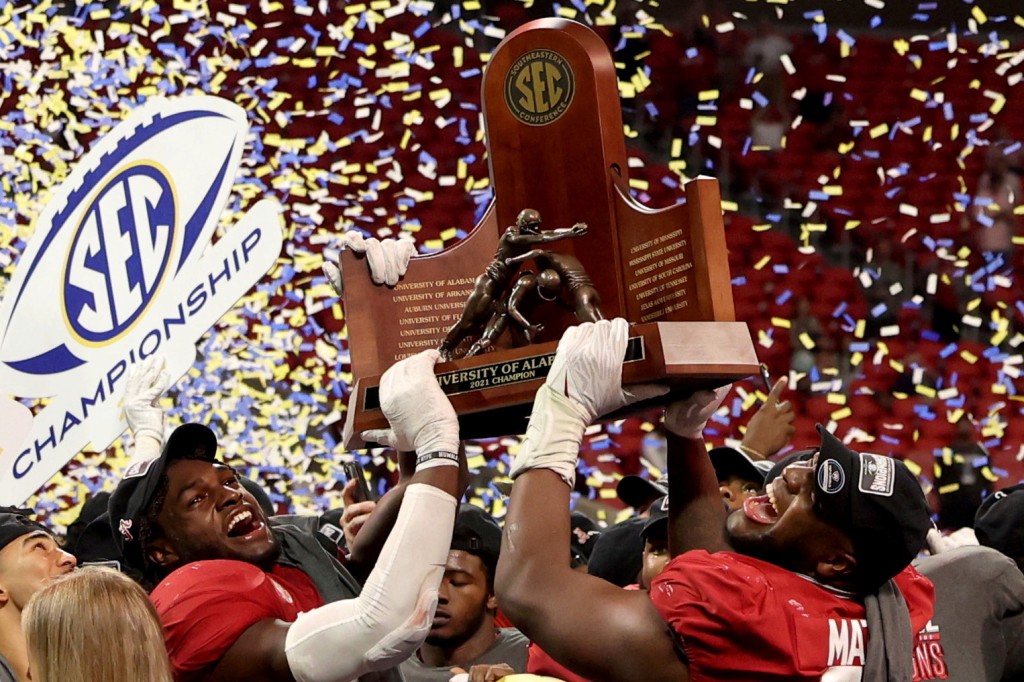 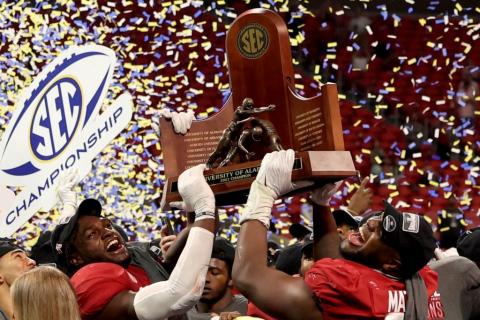 You’re SEC’d out. You have Alabama fatigue. You’re tired of the same lopsided results on the biggest day of the college football season.
It’s understandable. It is expected.
But there are plenty of reasons to look forward to the Jan. 10 national championship game in Indianapolis and to be genuinely excited for the Alabama-Georgia rematch with everything at stake. The title game, after the Crimson Tide beat the Bulldogs, 41-24, in the SEC championship game on Dec. 4, has all the makings of a classic.
Below are five of them:
The talent
The two teams have up to eight potential first-round picks in April’s NFL draft, and that doesn’t even include arguably the top two prospects in the game: Alabama quarterback Bryce Young and edge rusher Will Anderson Jr., the nation’s sack leader with 17.5, neither of whom is yet eligible.
The field will be dotted with future Sunday stars. Alabama has the best left tackle in the sport in Evan Neal. Georgia’s defense is littered with future pros: dominant defensive tackle Jordan Davis, linebacker Nakobe Dean, defensive end Travon Walker and wide receiver George Pickens.
Alabama’s Bryce YoungUSA TODAY Sports
NFL scouts will flock to Indianapolis for this matchup. It’s the combine before the combine.
Georgia’s defense is ranked second in yards per game, while Alabama’s is sixth. Alabama’s offense is third in scoring and Georgia’s is ninth. These are the country’s two best teams by a mile, as their respective one-sided College Football Playoff semifinal victories showed.
The quarterbacks
Alabama’s Young was as elite as elite recruits get, ranked second in the nation entering college by 247Sports.com. Georgia’s Stetson Bennett IV was once a walk-on.
Young became the first Crimson Tide quarterback to win the Heisman Trophy and is one victory away from completing a storybook season, in which he has already set the SEC powerhouse’s record for most touchdown passes in a season, with 46.
Bennett started the season as the Bulldogs’ backup and has been questioned every step of the way. He was heavily criticized (as was his coach for sticking with him) after the loss to Alabama, only to respond Friday with arguably the best performance of his career in the Orange Bowl, a three-touchdown, 313-yard masterpiece against Michigan. A victory on Jan 10, and Bennett will have authored a fairytale story Hollywood wouldn’t believe.
The two quarterbacks are equally fascinating, and do have similarities as undersized, yet tough and smart.

Alabama lifts the SEC Championship trophy after beating Georgia in December.Jason Getz-USA TODAY Sports
The Metchie effect
Dynamic Alabama receiver John Metchie III’s absence was evident in the Cotton Bowl, when the Crimson Tide resorted to the run to counter losing its top weapon. Some of that had to do with facing Cincinnati’s elite secondary, but there is no replacing Metchie. Remember, when Metchie suffered his torn ACL late in the first half of the SEC championship game, the Crimson Tide already had built a touchdown lead.
Metchie’s absence will allow Georgia to focus more on Jameson Williams, who was limited to seven catches for 62 yards by Cincinnati after destroying the Bulldogs in the SEC final. Alabama won’t just run through Georgia like it was able to do against the Bearcats. A major advantage has been taken away.
Revenge
Everyone will be motivated. It’s the national championship game. But Georgia will have an extra edge. It has years of pent-up frustration over its seven straight losses to Alabama, the heartbreaking 2018 national title game loss in overtime and the SEC title game a month ago, in which the Crimson Tide ended the Bulldogs’ perfect season. The top-ranked scoring defense, in particular, will be juiced up, after getting gashed for 536 yards and 41 points by Young and company. Georgia looked like an angry team in its rout of Michigan. Multiply that raw emotion at least three-fold for this game.
The coaches

On one sideline is the greatest coach of all time, Nick Saban, looking to win his record eighth national championship and seventh at Alabama. On the other is his former assistant, Kirby Smart, trying to beat the master and win the big one for Georgia. Smart and the Bulldogs are actually favored by 2.5 points, though that’s not as much as they were favored by in the first encounter. Saban, of course, owns an absurd 25-1 record against former assistant coaches and will no doubt use the spread as motivational ammunition.