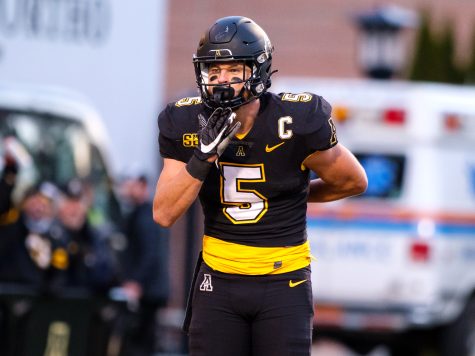 App State took down Georgia Southern 27-3 on Senior Day at The Rock Saturday, completing its first perfect season at home since 2018.
“That was emotional. Those guys have done a lot for Appalachian State,” head coach Shawn Clark said. “They’ve given their all for the last five and six years.”
Senior Day activities preceded the game, where 28 seniors and super seniors were recognized for their careers wearing the Black and Gold. Seven Mountaineers closed out their sixth year in Boone with their 34th home victory and 62nd career victory, including defensive lineman Tommy Dawkins Jr., quarterback Jacob Huesman, offensive lineman Baer Hunter, defensive back Kaiden Smith, defensive lineman Caleb Spurlin, kicker Chandler Staton and receiver Jalen Virgil. 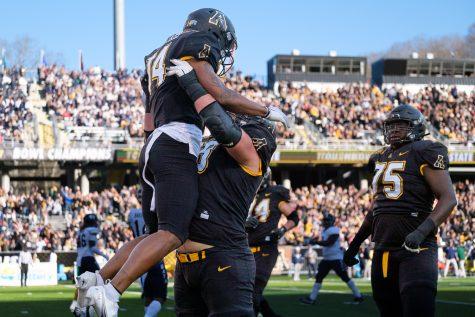 Super senior receiver Malik Williams celebrates his first quarter touchdown with junior offensive linemen Isaiah Helms, left, and Damion Daley, right. (Max Correa)
“It’s really cool to call this place home for not only the last five years but for the rest of my life,” Hennigan said. “I’m indebted to this university forever, and I can’t wait to see the growth and the progress this program continues to make.”
The Mountaineers struck first on an eight-play, 80-yard touchdown drive that featured connections between multiple seniors. Graduate student quarterback Chase Brice found super senior receiver Thomas Hennigan for two first downs, totaling 43 yards. On fourth-and-nine, Brice unloaded as he was hit, dropping a 36-yard pass into the arms of super senior Malik Williams for a score.
“The ball had to get out pretty quick. They were getting to me here and there,” Brice said. “Not too thrilled with my percentage there … But we did what we had to do today.”
App State struggled to stop Georgia Southern’s triple option, run-heavy offense, leading to long drives that kept the clock ticking. The Mountaineers only had four possessions in the first half, two of which resulted in punts and another in a turnover on downs. The Eagles punted four times before attempting a 51-yard field goal as time expired on their fifth and final possession. The attempt was no good, and App State took a 7-0 lead into the intermission.
Each team punted twice to open the second half before App State ended the 27-minute scoring drought with a 40-yard field goal. Staton surpassed 2004-07 running back Kevin Richardson for the program’s all-time leading scorer on the kick after Richardson’s 444 points owned the record for nearly 14 years. 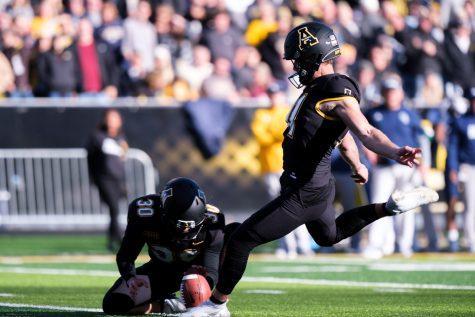 Super senior kicker Chandler Staton drills a field goal to put the Mountaineers up 10-0. Staton has missed just one of his 19 field goal attempts this season. (Max Correa)
Georgia Southern responded with an 11-play, 69-yard drive that was capped off by a 38-yard field goal to bring the score within seven. Virgil returned the ensuing kickoff 97 yards to the house to push the Mountaineers back up by 10. Virgil’s return tied him with former App State running back Darrynton Evans for most kick returns for a touchdown in program history at three.
“The fact it was on Senior Night too just made it even more special,” Virgil said. “I had a feeling for some reason that if they gave me an opportunity, and they gave me two, so I had to take advantage of one of them.”
The Mountaineer defense continued to dominate the Eagles, forcing a seventh punt in nine drives. Georgia Southern finished the game with eight punts, two turnovers on downs, one missed field goal and one made field goal on 12 drives.
“I think we’ve been performing at a high level these past couple of weeks, and I think that just goes to our preparation,” senior linebacker D’Marco Jackson said.
On the first play of App State’s ninth drive, Brice found Hennigan for a 68-yard touchdown score. Hennigan broke away from his defender and sprinted into the end zone for six. As fireworks went off for Hennigan one last time in Kidd Brewer, he turned to the crowd to take a bow and blow a kiss.
“I wanted to score really bad. I wanted them to know how much I appreciate them,” Hennigan said. “To be able to go out like that and make a play like that, it’s definitely things you dream about as a kid growing up. I’ll remember that for the rest of my life.”
Staton scored the game’s final points on a 36-yard field goal, boosting the Mountaineers to a 27-3 Black Saturday victory. 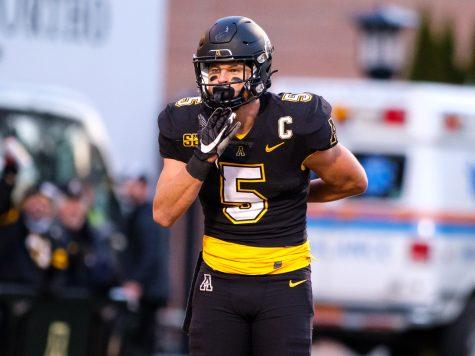 Super senior wide receiver Thomas Hennigan takes a bow after a 68-yard touchdown. Hennigan ranks fifth in program history for touchdown receptions at 22. (Max Correa)
App State’s defense controlled the game from start to finish, giving up less than 200 total yards and racking up 12 tackles for loss. On third downs, Georgia Southern was only able to convert four of its 17 attempts.
Smith led the team with nine tackles in his final game in Kidd Brewer, also adding one tackle for loss. Jackson and super senior defensive lineman Caleb Spurlin both added seven tackles to the effort. Super senior defensive lineman Demetrius Taylor finished with one sack, one pass breakup and one forced fumble.
Smith missed the first four games of the season after tearing his Achilles in mid-April but returned to the team to finish his career.
“I’m just nothing but blessed and thankful to even have the opportunity,” Smith said. “Watching our defense fly around, they have a contagious energy that you just want to be out there and playing with them, so I appreciate every snap I get with those guys.”
Offensively, the Mountaineers found more success passing than running the ball. Brice threw for 235 passing yards and two touchdowns with no interceptions. Super seniors Hennigan, Williams and Virgil all scored touchdowns, while super senior receiver Corey Sutton led the receiving effort with five catches for 55 yards. Hennigan caught three balls for 111 yards.
App State closes the regular season on a six-game win streak to finish 10-2 overall and 7-1 in conference play. The Mountaineers travel to Lafayette Dec. 4 to take on Sun Belt West Division champion Louisiana. The championship matchup between the Mountaineers and No. 23-ranked Ragin’ Cajuns kicks off at 3:30 p.m. and will air on ESPN.
“Back in October, our guys came back in and regrouped and came back to work, and that’s what’s so special about this place,” Clark said. “We talk about coming here to get a world-class degree and playing for championships. We have a chance to do that.”

What Is Spousal Abandonment In Georgia?
Gilbert Hartmann LaPiere- Bio, Family, Education, and Other Interests.
Violent Antifa Riot in Atlanta Manned by Out-of-State Invaders
Coin As A Means Of Propaganda: Georgian And Western Experience – Analysis
Georgia falls to Missouri in regular season finale