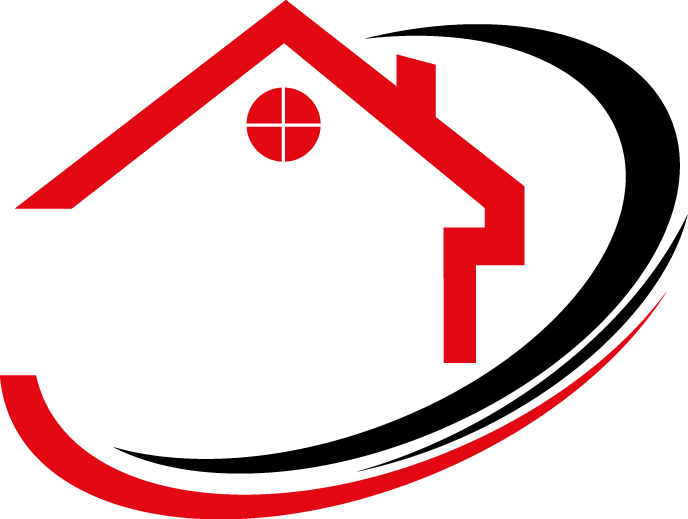 Any of Georgia’s many venomous snakes could be slithering in the weeds as you’re clearing out your garden. Learning how to recognize dangerous snakes is essential to the safety of your family and pets. Just as important is knowing the do’s and don’ts when you identify that a snake has nested on your property and that includes having a trusted wildlife control and removal expert on call.

We can’t give snakes a completely bad rep, not even those with poisonous, lethal bits. Why not, you ask?

Believe it or not, there are laws protecting snakes. Even so, you don’t want snakes going after your small pets, slinking around your property or sneaking into your house. These factors make snake identification and control and removal of snakes a responsibility for all homeowners to share.

The primary group of venomous snakes in Georgia are the Pit Vipers, which have a heat-sensing pit between the eyes and nostril. Pit Vipers have fangs that fold against the roof of the mouth. Most, but not all, pit vipers have triangular-shaped heads (as do a small variety of non-venomous water snakes). The pupil of the eye is vertical.

The only member of the other group of venomous snakes to be found in Georgia is the Eastern Coral Snake, a member of the Elapids family, which has fixed fangs (also includes cobras, kraits, and other coral snakes). 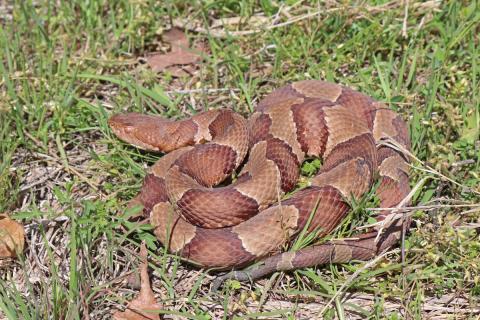 Visual Clue: Look for the Hershey Kiss markings. Young copperheads have a yellow-tipped tail, adults do not.

The copperhead snake is common throughout Georgia (except the most southern region). These snakes prefer to nest in hardwood forests. About 2-3 feet in length when fully grown, copperhead snakes are light brown to pinkish in color. Copperhead markings are dark, saddle-shaped crossbands that resemble a side view of a Hershey Kiss. 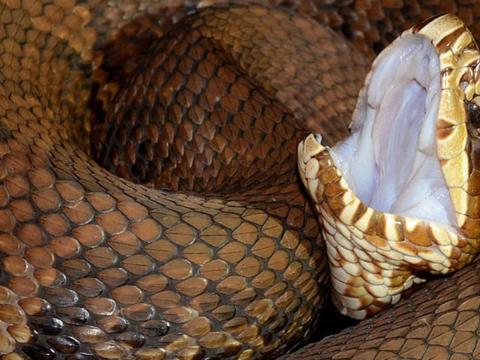 Visual Clue: Dull yellow belly. Black band extends from the eye toward the neck. Only young cottonmouths have yellow-tipped tail.

In the face of perceived threats, the cottonmouth snake often stands its ground with its mouth wide open. Cottonmouth snakes are found in wetland habitats but will travel across land to locate food. Adults reach 3-4 feet in length and vary in color from dull brown to olive green with dark crossbands. The black band between the eyes and neck differentiates the cottonmouth from a harmless water snake. 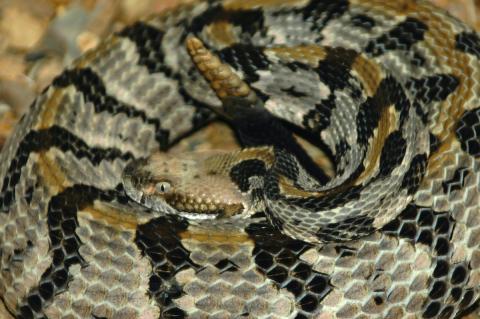 Visual Clue: V-shaped crossbands, some with orange stripe down the mid-back.

The canebrake or timber rattlesnake is found throughout Georgia where it thrives in both land and aquatic habitats. Adult timber rattlesnakes reach five feet in length and are gray in color. As the name implies, the black tipped tail rattles. If you ignore the canebrake snake, it will ignore you: rarely, will this snake attack if you back away. 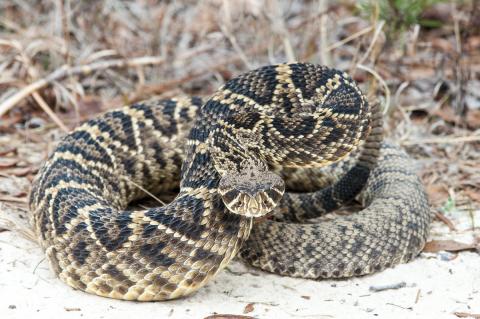 Considered the most dangerous snake in the United States, the eastern diamondback rattlesnake has a potent venom. It can grow to over six feet in length. These snakes thrive in dry land habitats but will also make a home in wet areas. The diamondback rattlesnake is light to dark brown in color with a pattern of brown and yellow diamonds. 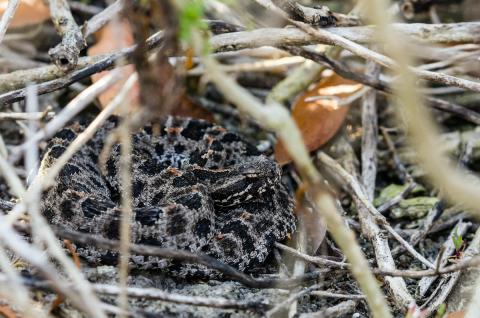 Named for its small size, when coiled the pigmy rattlesnake is barely noticeable in pile of yard debris, leaves, or in grass. Pigmy snakes are dull gray in color with dark gray or brown blotches on the back and sides. These snakes can be found in many parts of Georgia. 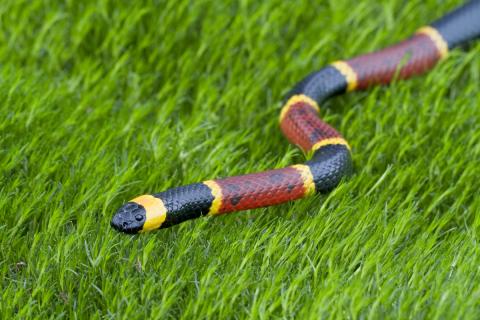 Though rare, the Eastern Coral Snake has been found in southern-most Georgia. It thrives in fields, wooded areas, and around ponds. Though only 2 feet in length at full growth, a bite from the eastern coral snake can be deadly. Don’t confuse the red, yellow, black ring order on this snake with the colored rings on the Scarlet Kingsnake, which are red, black, yellow. Both are pretty snakes, but one can kill you.

5 Steps for When You Spot a Snake in Your Yard 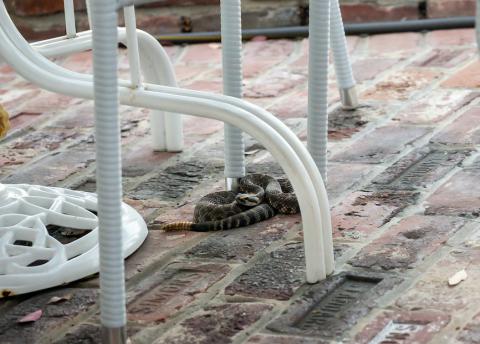 Inevitably, snakes will find their way into residential backyards, parks, and woodlands throughout Georgia. Though much more common in rural and suburban areas, snakes occasionally make their way into city parks and neighborhoods, too.

Most snake species are secretive, spending most of their time underground and under cover. That’s where trouble begins for gardeners and outdoor enthusiasts. As you start your spring yard work, you may rouse a snake from a cozy home it’s made beneath dead plants, brush, firewood, leaves and other natural debris. Active gardeners may seelarger snake species such as corn and rat snakes and racers. These larger snakes will eat mice, rats, and occasionally birds and their eggs.

If you have a barn or shed on your property, snakes may take refuge in these structures to shed their skin. They also will slither into crawl spaces underneath homes, or sometimes in a home.

Best Ways to Keep Snakes Away 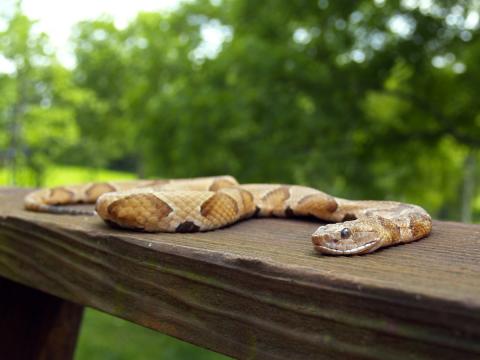 The best way to keep snakes from entering your home or other building is to prevent snakes and snake food (rodents) from living on your property. If you have a rodent problem, you’ll need an exterminator to address that before they can address they snakes. Some general tips:

When considering options for pest, rodent, and wildlife management, you need an expert who understands the interrelated nature of the ecosystems and the creatures that it supports. If you don’t, you run the risk of not having good results and may even make the problem worse, not better.

Houseman Services is the only complete home services company in the Athens, GA area offering wildlife management, pest control, lawn care, and much more. Houseman has developed a program that works in tune with the natural environment to provide the best care for your property. Contact Houseman Services for all of your residential or commercial property maintenance needs.

Snake Bite! What To Do

Before snakebite treatment is necessary, the snake must be venomous. Using a field guide (or the res listed below), familiarize yourself with the 6 species of venomous snakes that live in Georgia. 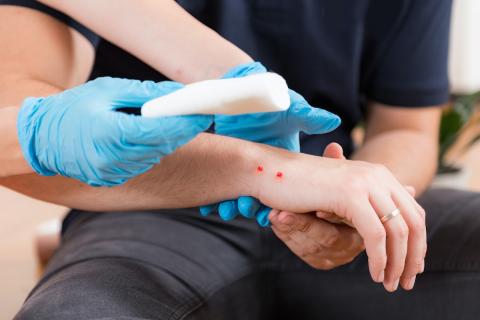 Keep the bitten area below heart level, and remove rings, watches, and tight clothing. Try to identify the snake without putting yourself at risk or wasting valuable time.

DO get to a hospital or emergency medical facility immediately!

The universal treatment for a serious snakebite is the use of antivenin or snakebite serum, which should only be administered by a medical doctor. If local doctors aren’t sure which antivenin to use, advise them to contact the American Association of Poison Control Centers (1-800-222-1222).

DON’T eat or drink anything. This includes alcoholic beverages.

DON’T take ANY Medication. You could make things worse as some medications can accelerate the venom action.

Today in Great Lakes History – December 18
FACT SHEET: How the Inflation Reduction Act Will Cut Energy Costs, Bring Jobs to Georgia
3 of the Best Places to Visit in Georgia with Your Significant Other
Divorce Financing in Georgia
Georgia special grand jury ends probe of Trump, 2020 election