A few days back, we shared an interesting piece of “real time” data suggesting an increase in foot traffic to retail “hot spots” across Georgia last weekend, the first that certain businesses in the state were allowed to reopen.

But since the “anonymized” cellphone location data didn’t offer any indication of spending, we speculated that consumers desperate for freedom after being cooped up inside for weeks might simply be taking advantage of the excuse to ramble and roam the retail landscape and window-shop, even if most of the stores in any given strip mall remained closed. Since consumer spending drives 70% of the American economy – an oft-quoted stat – if nobody was buying, then no economically productive activity was occurring and the “green shoots” were really just a mirage. 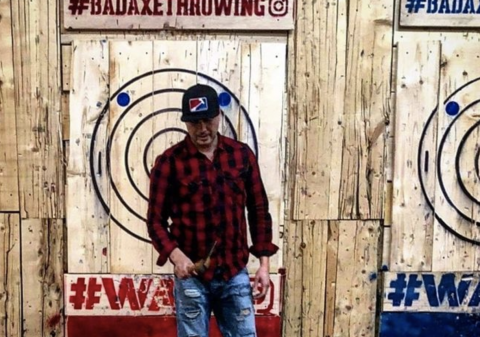 Over the weekend, we learned Warren Buffett has jettisoned his airline stocks and decided to sit this crisis out (laying most of the blame for his decision at the Fed’s doorstep). A report in Bisnow looking back on the first week of Georgia’s reopening found that it was mostly “a disaster” for small businesses.

Bad Axe CEO Mario Zelaya expected business to be bad, maybe 10% of the hundreds of customers he would expect to see throw axes and drink beer on a typical weekend. “That was the worst-case scenario, especially with all the marketing we did,” Zelaya said. “The reopening weekend was a disaster. We had two customers all weekend.”

Despite the public health and political debate, one thing is clear: The longer retailers and restaurants stay closed, the harder it will be for them to survive. “I think every small-business owner is in the same position as we are where they’re nervous, and they’re worried, and they’re scared of public backlash,” Zelaya said. “Our only decision right now is to survive. We’ll take measures to ensure that.”

Commercial landlords mostly confirmed that about 50% of the rent from their retail tenants has been collected since the crisis began. And in states like Georgia and Texas, landlords have been mostly understanding with small businesses and even smaller chains, allowing them enough wiggle room to wait to reopen until they have a better shop at operating profitably.

Atlanta-based real estate firm Ackerman & Co. collected about 50% of its rents from its retailers in April. Retail President Leo Wiener said he doesn’t expect May to be much different. Wiener said Ackerman continues to be understanding with tenants who choose not to open despite Kemp’s decree that they can legally do so. “At this point, it just doesn’t make business sense to push a tenant open. I’ve got to trust that the restaurateur knows their customer,” he said. “I just think it’s too early for landlords to start pushing tenants.” Bob Prosen, the CEO of small to midsized business crisis consultant The Prosen Center for Business Advancement, said many mom-and-pops don’t have enough revenue to remain shuttered much longer.  “It certainly is not their landlords that are driving this. I understand it’s a problem, but that’s not the primary driver,” Prosen said. “They are going to lose their businesses.” About a third of Atlanta-based Coro Realty Advisor’s retail tenants reopened over the past weekend, Coro President Robert Fransen said. Most others expect to reopen over the next two weeks, he said. But even with the lifting of the shelter-at-home order, Coro hasn’t demanded any of its tenants turn the lights back on. “We don’t want to treat our tenants that way. Our personal opinion from the company is [the reopen decree] was too soon,” Fransen said. “So we did feel it was unfair to box tenants in on a decision we didn’t agree with.”

Because otherwise, businesses – who aren’t getting the same relief that employees get when they’re laid off (employees collect unemployment whereas small businesses are getting zero-interest loans, though at least most of the ‘PPP’ loans should convert to grants) – are just adding to the “L” tab that they’re going to need to pay back later.

Zelaya said his Atlanta Bad Axe Throwing location is a “canary in a coal mine” to see how things may return for the chain once other locations open. This weekend, it plans to reopen in Oklahoma City and soon after, it plans to restart locations in Texas. His landlords have put little pressure on him to open before he is ready, let alone permitted by state law. Zelaya said he has been given rent concessions on many of his locations. “Our [Atlanta] landlord is an extremely phenomenal person. From the very beginning when it all went down, essentially his words were, ‘I feel for you man, we’ll figure it out. Just be safe,’” he said of Gartland Long, who owns Bad Axe’s location at 1257 Marietta Blvd. NW. “He’s been arguably the easiest landlord we have to work with.” But when Zelaya can, he is trying to reopen locations in hopes of just making some money again. Not only did Bad Axe lose revenue from walk-in customers, but it had to refund money from groups that booked events ahead of time. “When someone on staff gets laid off, they get unemployment insurance and they get relief from the government. When a small business is forced to shut down, we get offered loans. We don’t get the relief,” Zelaya said. “It’s not like we’re vicious, money-hungry large corporations. We have families to feed, too.”

Even the businesses that are allowed to reopen won’t be be running at full capacity for months. In other words, investors might want to wait for a few more weeks of spending data before making any conclusions about what letter this rebound will most closely resemble.