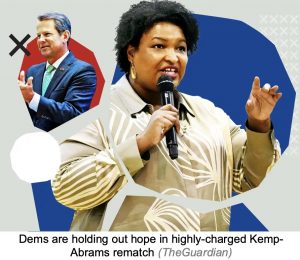 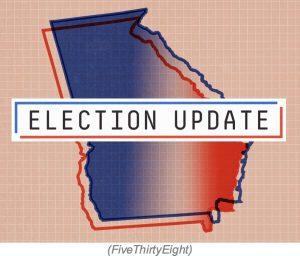 Georgia elections once again dominated the headlines with the new allegations against Senate candidate Herschel Walker (R) of paying for the abortion of a woman who also later fathered one of his children.

Walker is challenging incumbent Senator Raphael Warnock (D), who flipped the long-held GOP seat in 2020. The latest controversy underscores the high stakes of what could once again be the pivotal contest in deciding the balance of power in Congress's upper chamber.

On the same ballot, Georgians will also cast their vote in the country's highest-profile gubernatorial election, where national voting rights advocate and former Georgia State House Minority Leader Stacey Abrams (D) is in a rematch with Republican Governor Brian Kemp.

Peach State Politics
While Georgia has long been a GOP stronghold, Democrats have made significant gains in a rapidly growing and diversifying electorate which put the state in play as a presidential battleground for the first time in decades. 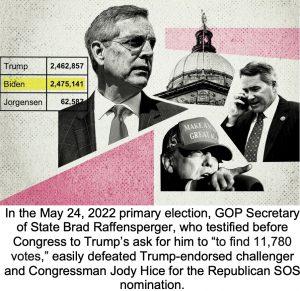 Efforts by Trump and his allies to overturn the results of the election, which was called on November 20, 2020 by 11,779 votes after a manual audit, are the subject of an ongoing grand jury investigation by the Fulton Country District Attorney.

Biden's win was followed by Democrats' astounding victories in both 2022 Georgia US Senate runoff elections on January 5, 2021 and, with them, control of the United States Senate.

The same year, the Georgia GOP lost one US House seat and held onto their majorities in both state chambers, but lost one net seat in the state senate and two in the state house. 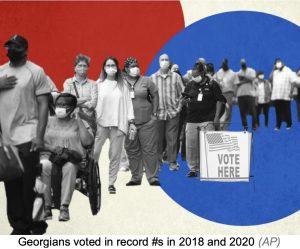 In that contest, Kemp, who at the time was Secretary of State and in charge of running the election process, disqualified over 1.4 million predominantly low-income and minority voter registrations during his term.

Abrams turned out more voters than any Democrat in Georgia history, surpassed only by the 2020 presidential election.

2022 US Senate
Warnock, still a practicing pastor and the first African American to represent Georgia in the US Senate, is now up for reelection to a full term, facing Walker, the popular former Georgia Bulldog legend who claims to be a born-again, pro-life Christian.

Despite a campaign haunted from the outset by allegations of domestic violence and acknowledgment of fathering three children out of wedlock, the national GOP leadership remains solidly behind Walker's candidacy in hopes of reclaiming the seat and, possibly, the US Senate. 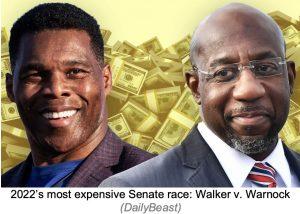 Fundraising: According to their respective campaigns, as of September 30, 2022, Warnock had raised a record $90 million with $13.7 million cash on hand. Walker reportedly has raised a total of $33 million, with $7 million on hand.

Those figures do not include an estimated $75 million in outside spending in the Senate race.

Debate: On Friday, October 14, Warnock and Walker will face off in a lone, one-hour debate in Savannah at 7:00pm ET -- hosted by Nexstar Media Group and its local affiliate, WSAV-TV.

Democrats are concerned, however, that voters will split their preference between the parties in the Senate race and the gubernatorial contest, where their nominee appears to be losing momentum.

2022 Governor
The heated gubernatorial contest in 2018 was ground zero for the country's most bitter recount and legal battle, ending in a 50.2% victory for Kemp to Abrams' 48.8%. 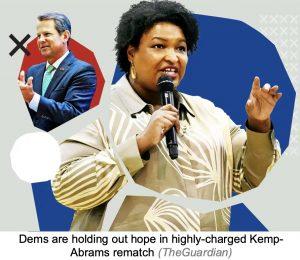 Since her loss, Abrams founded Fair Fight 2020, and has spearheaded state and national efforts to register and get out Democratic voters who stayed home in previous cycles, particularly in cities like Atlanta and its surrounding suburbs. Her efforts played no small part in Biden's historic 2020 win.

Fundraising: According to Abrams, her campaign and associated leadership committee have raised a total of $85 million since announcing her second bid for governor, with now $11 million cash on hand. Kemp announced he had raised nearly $60 million for his reelection and had $15.4 million on hand as of September 30.

Debate: Abrams and Kemp will debate on Monday, October 17 at 7:00pm, hosted by the Atlanta Press Club and Georgia Public Broadcasting.

One issue that may help close the gap for Abrams is abortion. According to an August 11-18, 2022 survey of registered voters by EMS Research and commissioned by NARAL, 62% of respondents opposed the overturning of Roe v. Wade. A mirror 62% also opposed the preemptive six-week total ban on abortions signed into law by Kemp in 2019 and triggered on July 20 of this year by the Supreme Court's decision.

Former MMA Fighter's Chilling Note Might Be Big Clue in Georgia Mom's Murder: Report
Georgia Football: How Much Will a Offense Actually Change
University of Georgia to Spend $8.5M on Campus Security Upgrades
7 Stunning Tiny Homes In Georgia For A Dream Vacation
Republicans challenge updated voting technologies, starting with Georgia one year ago