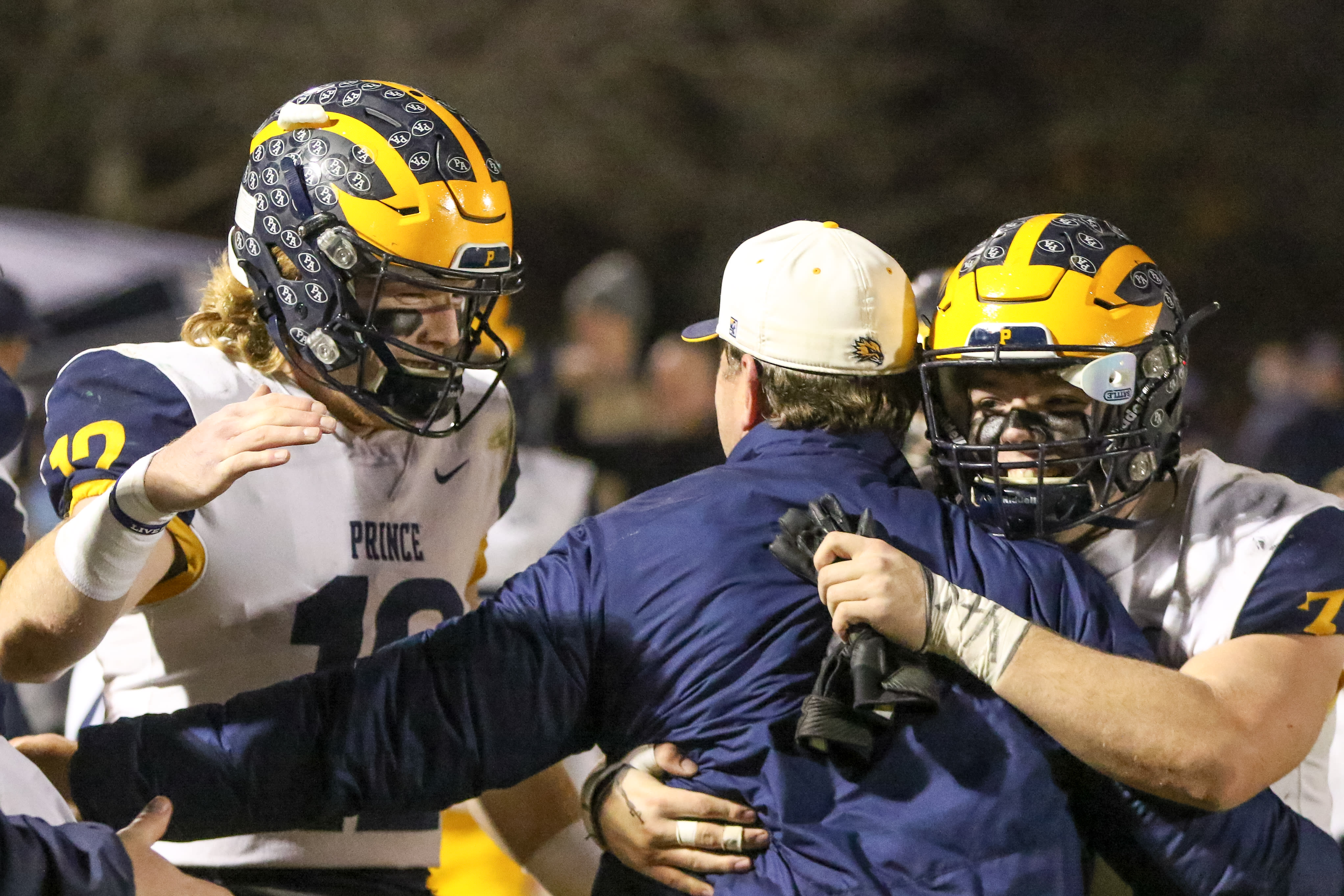 NORCROSS — Brock Vandagriff let himself soak up the moment with a few minutes to go in Prince Avenue Christian’s runaway 50-3 win Friday night at Wesleyan.
“I can’t believe we are going to play for a state championship now,” Vandagriff said. “I’ve been dreaming about this my whole life man.”
He has. His Wolverines will. Behind three passing touchdowns and one score on the ground, the Bulldog signee led Prince Avenue (12-1) to the Georgia High School Association’s Class A private state championship game currently scheduled for Dec. 28.
“It is an amazing feeling,” Brock Vandagriff said. “I can’t even describe it honestly. Me and my Dad have dreamed about this forever. To be able to bring it to Prince is something special. I think this is the second time we have been to the state championship in the whole history of Prince Avenue.”
Vandagriff is the star quarterback. His father, Greg, is the head coach who was able to exorcise a few state semifinal demons with the victory. 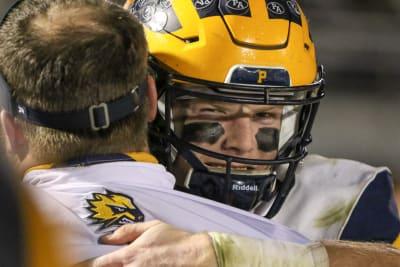 Brock Vandagriff was a happy Wolverine after Prince Avenue Christian’s 50-3 win in the Class A state semifinals on Saturday night. (Jeff Sentell/DawgNation)
“I thought forever I was the [Marty] Schottenheimer of [GHSA state playoff] semifinal games,” Greg Vandagriff said. “You know this is six out of seven years in a row. Meaning six out of the last seven years in the semifinals. I was 0-5 before that. Early in my career, we made it twice. So I was really 0-7 before that.  So know I am 1-for-8, but I want to be 1-for-1 when it matters.”
The Prince Avenue coach was comparing his playoff track record with that of longtime successful NFL head coach Marty Schottenheimer. Schottenheimer was a head coach for 21 seasons. His teams were always successful. To a point.
Schottenheimer only managed a 5-13 record in the postseason. Greg Vandagriff now gets a chance to shake off some of that bad playoff mojo for good against Trinity Christian (12-2) in about 10 days.
His son Brock running out of cool moments in his young life of late. Vandagriff and his squad eliminated 5-time defending Class A state champion Eagle’s Landing Christian Academy last week by a 38-0 margin. Then he wrapped up his high school coursework.
That was the same day he signed with Georgia. Then Vandagriff led Prince to a second road win at Wesleyan this season to help shatter that jinx with his father and the Prince program in the state semifinals.
“This is the definition of living the dream,” Brock Vandagriff said. “I graduated from high school on Thursday with my last exam. So done with school. Then we come and we advance to the state championship tonight. The offense had a great game. I think we went on a 50-0 run and can’t say enough about the defense either. They were getting after it as well.”
Wesleyan actually went up 3-0 on its first series of the game. That was it. Prince Avenue tallied the next 50 points of the contest. The Wolves literally did not have an answer for Prince Avenue and Vandergriff.
His Wolverines have been keyed by the defense of late having given up just three points in their past two games.
The newly-minted Georgia signee unofficially completed 21 of his 30 attempts for 271 yards and passing strikes of 5, 8 and 9 yards. He also added a 2-yard run.
For at least the third time this season, he saw a future bookend tackle for Georgia on the sidelines supporting him and cheering him on. But this time 5-star Georgia signee also had recent RB signee Lovasea’ Carroll with him, too.
“I think they have been here probably three or four times and it means a lot,” Vandagriff said. “It is just showing how much they care about the future at Georgia. It is more than just a game and more just a team. It is a friendship between us three.”

Check out a few of the big scores from Prince Avenue Christian in the game below.

Prince Avenue Christian 50, Wesleyan 3. The No. 1 Wolverines are set to play for the GHSA Class A private state title on Dec. 28. pic.twitter.com/1YWNSzEWaG
— Jeff Sentell (@jeffsentell) December 19, 2020 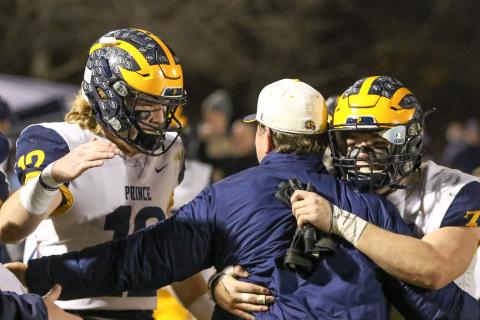 Brock Vandagriff celebrates with his father and teammaes after a 50-3 road win at Wesleyan in the GHSA Class A semifinals on Friday night. (Jeff Sentell/DawgNation)

3 of the Best Places to Visit in Georgia with Your Significant Other
TRENDING: Young GA Man Shot And Killed During Alleged Citizen’s Arrest; Horrifying Video Just Released
Five reasons to watch Alabama-Georgia national title game
Georgia Fans Weren’t Allowed to Tailgate on Campus So They Tailgated Off Campus
Jason Aldean explains why Macon, Georgia is such a personal album title: “It all started there”