ATHENS — Georgia basketball proved it could measure up to good competition on Saturday night, winning decisively over battle-tested Cincinnati in Stegeman Coliseum.
The Bulldogs ran their record to 6-0 with the 83-68 victory, sealing their best start to a season for a UGA team since the 1982-83 Final Four unit.
“We knew the competition, the strength and the length would be a test,” said Georgia coach Tom Crean, who’s in his third season leading the program. “We really rose to the level of the competition. It wasn’t just us matching their energy and toughness, we brought our own.”
Toumani Camara had 19 points and 10 rebounds to lead a Bulldogs’ team that had four players score in double figures.
Sahvir Wheeler had 12 points and 7 assists, and Justin Kier had 18 points and was 5-of-5 from the free-throw line.
“We went really hard this week, just to show we can be physical as well,” Kier said. “This showed the maturity of our team.”
Camara went to the rim for a basketball at the 4:26 mark of the first half to spark a 15-0 run that left Georgia up 49-26 as the teams headed to intermission.
The Bearcats (2-4), who lost at No. 12 Tennessee by a 65-56 count, failed to get closer than 12 points in the second half.
“We just trust each other, the momentum is always up for grabs,” Camara said. “We had the momentum at the moment, and we just kept on going.
“I think we learned how good we can be playing together and staying focused on the task.”
Crean was certainly impressed with the 6-foot-8, 220-pound sophomore.
“For him to play that way against a physical team like Cincinnati said a lot,” said Crean, whose team won the battle of the board 39-38 despite being out-sized in the paint.
Georgia is scheduled to return to action at 7 p.m. on Tuesday against Northeastern in Stegeman Coliseum.
“It’s about getting on a one-game winning streak, that’s how you have to train your mind to think,” Crean said. “A good team never arrives, and a coach is never satisfied.
“Proud of the effort and the competitiveness tonight, absolutely, but we have to get better, and we can’t have a letdown.” 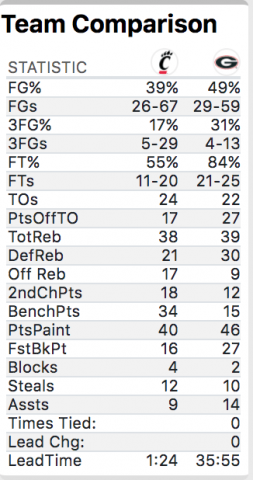