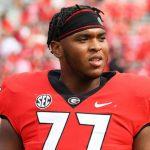 University of Georgia offensive lineman Devin Willock and staff member Chandler LeCroy were killed in an early morning car crash on Sunday in Athens, Georgia, just hours after the football team held its national championship parade, according to school officials.

“The entire Georgia family is devastated by the tragic loss of football student-athlete Devin Willock and football staff member Chandler LeCroy,” the school said in a statement Sunday. “Devin and Chandler were two special people who meant so much to the University of Georgia, our football program and our athletic department. We ask that everyone keep their families in your prayers during this very difficult time.”

Two other members of the football program were injured in the crash, the school said. They are both in stable condition.

“We are all heartbroken and devastated with the loss of Devin Willock and Chandler LeCroy,” Georgia head coach Kirby Smart said in a statement Sunday. “Devin was an outstanding young man in every way and was always smiling. He was a great teammate and a joy to coach. Chandler was a valuable member of our football staff and brought an incredible attitude and energy every single day. We grieve with their families for this tragic loss and will support them in every way possible.”

Police said they responded to the crash around 2:45 a.m. in the 900 block of Barnett Shoals Road. The 2021 Ford Expedition was traveling southbound when the vehicle left the roadway, striking two power poles and several trees, authorities said.

Georgia Bulldogs Offensive Linemen Devin Willock (77) after the college football game between the Arkansas Razorbacks and the Georgia Bulldogs on Oct. 02, 2021, at Sanford Stadium in Athens, Ga.Photo by Jeffrey Vest/Icon Sportswire via Getty Images, FILE

Willock, 20, was pronounced dead at the scene. LeCroy, 24, was transported to a local hospital, where he died from his injuries, according to Athens police.

“The UGA Athletic Association will work with our medical team as well as our mental health and performance personnel to make sure we are providing the best support possible for our staff and student-athletes who are processing this grief,” the school said in a statement. “We can provide no further comment at this time.”

INGLEWOOD, CALIFORNIA – JANUARY 09: A view of the National Championship logo on the field as the Georgia Bulldogs run a play against the TCU Horned Frogs in the College Football Playoff National Championship game at SoFi Stadium on January 09, 2023 in Inglewood, California.Kevork Djansezian/Getty Images

Police said the investigation is ongoing and that anyone with information about the crash can contact Lieutenant Butt at 762-400-7090 or via email at john.butt@accgov.com.