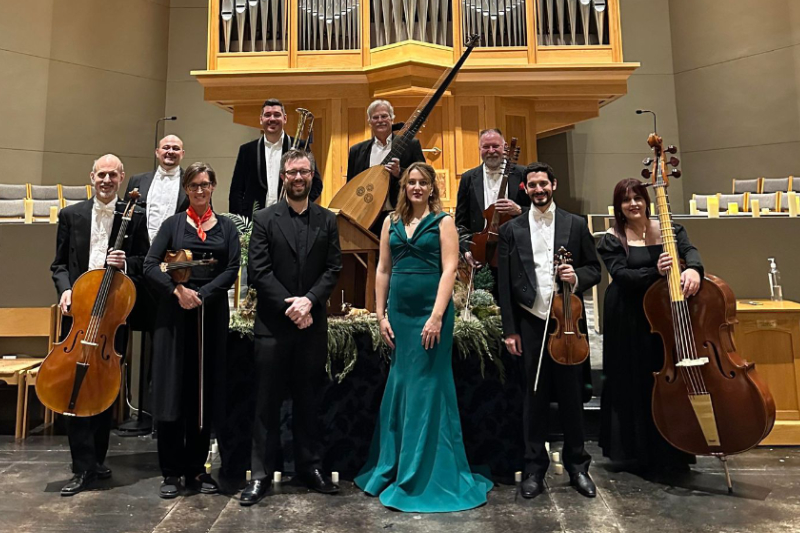 Founded by director Predrag Gosta in London in 1998, NTB moved to Atlanta some years ago, where it has remained a prominent presence in the city’s close “early music” community. Baroque Candlelight Christmas has become a staple among Atlanta’s holiday concert offerings.

One thing that differentiates it from most other Christmas concerts is that a significant portion of the program is not “Christmas music” at all, though much is. Nevertheless, some of the secular pieces adapt well to the Christmas theme in context, while others simply lend themselves to the festive nature of the occasion.

This year, there were a few last-minute changes to the printed order of the printed program. For one, the concert was to begin with the Prelude from Marc-Antoine Charpentier’s Te Deum in D major, H.146, but that and a couple of other pieces got moved around.

Then came the first orchestral work, Antonio Vivaldi’s Viola d’amore Concerto in A major, RV 396, with William Bauer as soloist. The cheerfully sunny first movement set the mood, followed by a lyrically reflective middle movement, then a more challenging finale.

Throughout the concert, Gosta directed the NTB ensemble from the harpsichord.

The Weinachtskonzert “Fürchtet euch nicht” by Christoph Bernhard (1628-1692) featured soprano Ana Torbica as vocal soloist. A brief instrumental “sonata” opens the work, then serves as a ritornello between the piece’s vocal sections in which an angel sings:

Fear not: for, behold, I bring you good tidings of great joy, which shall be to all people. For unto you is born this day in the city of David a Saviour, which is Christ the Lord.

The piece concludes with a sprightly, contrapuntal “Alleluia.”

Henry Purcell (1659-1695) was a pioneer in writing serious concert music for the trumpet, establishing it as a regular fixture of the Baroque orchestra. Purcell wrote for a “natural” trumpet without valves.

Trumpeter Aleksandar Arsić stepped up to join the orchestra for Purcell’s Sonata in D major, Z850, for trumpet and strings (c. 1693).

Then came Antonio Vivaldi’s Concerto in D minor, RV 127, for strings and cembalo. Unfortunately, there’s not much historical detail available about this beyond a manuscript, likely written between 1720 and 1736, although it is not infrequently performed.

Marc-Antoine Charpentier (1643-1704) composed six Te Deum settings, two of which are lost. The Te Deum in D major, H.146, is the best known primarily due to the popularity of its triumphal Prelude, or “Marche en rondeau,” with which NTB opened the second half of the concert. 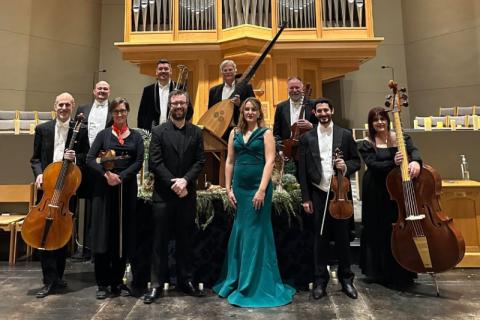 The Overture to “Ballet Royal de la Nuit” was attributed in the program list to Jean Baptiste Lully. That is not for sure. Some scholars suggest it was written by Jean de Cambefort, who composed six airs for the collaborative 13-hour-long Ballet, or another of several composers who also contributed.

The published edition by André Danican Philidor (1690) includes only the premier violon and basse di violon parts, with the three inner parts (marked haute-contre, taille, and quint) left empty in the score. These parts were realized and added into a 1984 edition by Benjamin Schute, which itself does not include the drumming part that is often heard in performance, as was the case with this one by NTB. This added percussion was a known performance practice in French Baroque opera, even when not notated in the music.

Mr. Frketic played a second organ work, the Magnificat primi toni, BuxWV 203, by Dieterich Buxtehude (c. 1637-1707), one of the most important and influential composers of the middle-Baroque. Buxtehude strongly influenced Johann Sebastian Bach, and his organ works remain a central part of the standard organ repertoire today, performed at recitals and church services.

It is a chorale fantasia based on plainchant and is the longer of two Buxtehude works that bear the title. The flamboyant introduction expresses the exultation of the Virgin Mary, followed by eight sections based on fragments of the chant.

The ensemble then performed the pleasant, well-known “Air” from the “Water Music” Suite No. 1 in F major, HWV 348, by George Frideric Handel (1685-1759), slightly rescored for this particular assemblage of musicians (no oboists in this concert, for example). But that is perfectly fine, something Handel would likely have done himself under the circumstances, and the music did not suffer.

Giuseppe Valentini (1680–1759) was known for his virtuosity as a violinist and his unconventional compositional style of writing for the violin. His 12 symphonies for strings, Op. 1, are strongly reminiscent of Archangelo Corelli. The last of these, Sinfonia Pastorale per il Santissimo Natale, Op. 1, No. 12, is (as the title indicates) meant to be performed at Christmas, which NTB did at this point in the program.

Two pastoral movements form the basis of the premise: an “Andante e Forte” that follows the “Largo” introduction and a second “Largo” between the two fast movements — an energetic “Allegro” and the “Presto” finale with its rapid dynamic contrasts.

The finale was “Let the Bright Seraphim” from George Frideric Handel’s oratorio Samson. In the context of the oratorio, the aria summons the celestial hosts of seraphim and cherubim to hail the dead hero, with trumpet figures responding to the singer:

In the oratorio, the aria proceeds directly into the final chorus after its contrasting section, but as a standalone concert aria, it readily makes the full da capo return. By itself, it can be taken as a call to praise the birth of Christ, rather than to hail a dead hero.

The musicians returned to the stage for an encore, “Unser trefflicher lieber Kammerherr” from Johann Sebastian Bach’s Peasant Cantata, BWV 212. It is an aria about how pleasant the new Lord is, in whom no one can find fault.

This aria could be assumed to apply to the newborn Christ when taken out of context. But the Peasant Cantata is a humorous secular piece, what the composer called a “Cantate burlesque,” written as a 36th birthday present for Carl Heinrich von Dieskau, a tax superintendent. Hence, the cantata as a whole is rife with jokes about taxes, sung by a peasant couple, and musical jokes. But the aria on its own worked quite well as an encore to this Christmas concert.

What to Do With Kids in Calhoun, Georgia
Artists United for Change Creates Abortion Rights Billboards in Advance of the Midterm Elections
Armed New Black Panthers march to protect demonstrators as they join peaceful protests in Georgia
New doc Thirst Trap launches on Tubi and Amazon
How to Pick Between the Georgia Islands [a Visitor’s Guide]